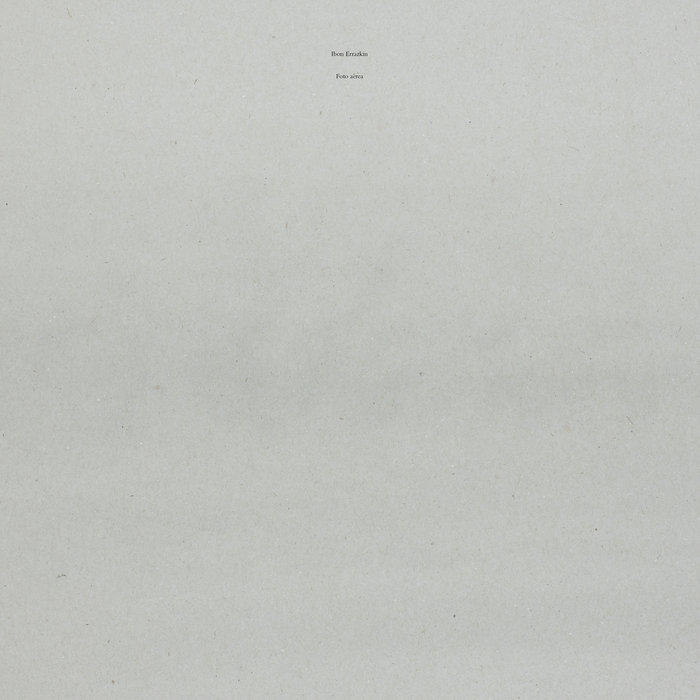 This Single is only available in digital format

We have already said so many things about Ibon Errazkin... A musician who has been a fundamental part of groups like AVENTURAS DE KIRLIAN, LE MANS and SINGLE, who has worked as a producer on albums for ANA D, NOSOTRÄSH (that inimitable “Popemas”), CORAZÓN, Carlos Berlanga... And who has developed, in parallel, his own unique path, incomparable, free from any constriction or prejudice… A MUSICIAN like this, in all caps, who is bigger than every adjective. That’s why having new material of his own making is a cause for celebration for all music lovers, in all its shapes and forms. Because those of us who know him know that each new thing that comes from this Basque musician can come from the most unpredictable place.

In this case, this Double Single comprising the songs “Foto Aérea” and “Las Descripciones” (dedicated to Josetxo Anitua, the singer from CANCER MOON) takes us to a peculiar place that is almost unexplored by Ibon: music without defined rhythmic patterns, composed of melodies that appear and disappear, repeating themselves even in different songs, the same way you can find in the dub world, and above all, in music for movies. But you can also find this in art, like when a painter decides to use the same theme over and over again, maybe at different times of the day or of the year. That is what is so peculiar about what this Single is doing, and what it is revealing about what will come with his next album, also called “Foto Aérea”, to be released in February 2018. Here, the music inspires the filmmaker, the dreamer, the creator of images and stories; this is the music that moves the world. Ibon plays with layers and melodies – on “Foto Aérea” with a Mediterranean air, more summery and rooted, and “Las Descripciones” is more dreamlike and ethereal – without ever betraying them, letting emotion take precedence over experimentation.

And the first proof of this inspiring ability is the video that Gabe Ibáñez filmed for the title song. It is exemplary visual inspiration, with Bressonian echoes where the images play with the melodies, and an interaction built on tremendously emotional and suggestive loops. Gabe Ibáñez, in addition to being the director of two movies, “Hierro” and “Autómata”, was also the director of LE MANS’ only video (“Canción De Todo Va Mal”, 1998), of two videos for SINGLE (“Su Recuerdo” in 2005 and “Pío Pío” in 2008), and Ibon Errazkin wrote the soundtrack for his first short, “Máquina”. This chemistry makes us think that probably, this marvelous and stimulating video is a necessary part of de Ibon Errazkin’s sonic project, closing a circle that we forced open again, waiting to see how the full-length fits into this suggestive offering. This is emotion in its purest form.

Bandcamp Daily  your guide to the world of Bandcamp